Extract from the interview with Anna H. in which she recounts her family history & her memories of the time of the Second World War and the post-war era in Lower Austria.

I was born in April 1929 in Auersthal in Lower Austria. It was a very cold year. The trees were frozen, and there was a lot of snow. My oldest sister was born in 1921, the second one in 1926. My parents were both born in Auersthal. My mother’s father was a carpenter, my grandmother ran a grocery store. All of my father’s family were farmers.

My mother went to high school and then worked as an educator in France. When World War I came, she was interned in France for a while.

My parents owned a grocery store and a farm with various animals. Later in adulthood, my husband and I moved to Vienna, where our daughter was born. Since then, I have lived there and in the summer in Lower Austria, in the countryside.

When I think back to the time of World War II, I remember that:

… I went to secondary school at the time [note FL: up to 14 years]. I didn’t learn a lot during this time because the teachers kept changing. I already finished school in 1945.

… a neighbor, a veterinarian who was called up as a lieutenant, told his wife to poison herself if the Russians came. She took the poison but her husband returned after the war. I had little contact with the Russians, but there were some young girls who left with the German soldiers to avoid the Russians. Then the Russians were withdrawn from our town and moved to Gänserndorf, their new headquarters.

… a requiem was held for the deceased soldiers in town. Wreaths were woven, and we wrote the names of the deceased on them. My cousin was missing in Romania and never came back. Leopold M., another relative of mine, was killed during the war too.

… there was the Hitler Youth during the war, in which I also participated. We met in the party house in Auersthal and then marched to the sports field and did gymnastics there.

… 20 French prisoners [note FL: French prisoners of war / forced labourers] lived and worked in Auersthal for a year. In the morning, a soldier walked through the village and led the French to the houses where they worked. In the evening, the soldier came back and brought each French to the former dance hall in the inn, where they slept. These French were only allowed to shop in the mayor’s grocery store. My mother then translated between the mayor and the French prisoners because she knew French. We also had a French man called Marcel who worked for us in agriculture and with whom we got along well.

… my aunt’s flat in Vienna was bombed, so she moved in with us.

… my sisters and I always had to work at home, e.g. remove the roots from the potatoes, help in the store, sort all the food ration cards – those for the coffee, for the sugar, for the margarine etc. At the beginning people only needed a few of these food ration cards to get along, later the rations became so small that all of them were needed.

When I think back to the time (immediately) after World War II, I remember that:

… then the Russians came. A lot was broken. A cousin of mine was a hunter and had a rifle. He left it at our place because he had entered the army. When the Russians discovered the rifle, a Russian shot at my father, but, fortunately, he did not hit him. We lived at the beginning of the village back then. Our handicraft teacher then took us to her cellar where we were hiding. We sat on the floor and slept like that. We wore long old clothes to look old in front of the Russians. We had to sleep at our neighbours’ for a while then. We could not go back to our house straight away because the Russians set up a garage there for about two weeks. We were only able to go back after the Russians closed the workshop. But then all the animals on the farm were gone.

… I always had to cut, sort and glue the food ration cards with my sisters and bring them to the “Nahrungsamt”. Then we got coupons and then food. We weren’t really hungry. But schnitzel was rarely served, only twice a year.

… I heard about the Austrian State Treaty on the radio because we didn’t have a TV back then. 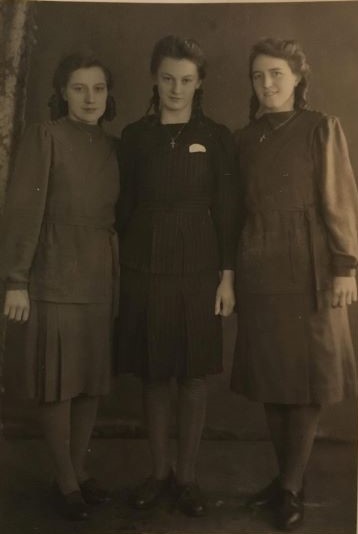 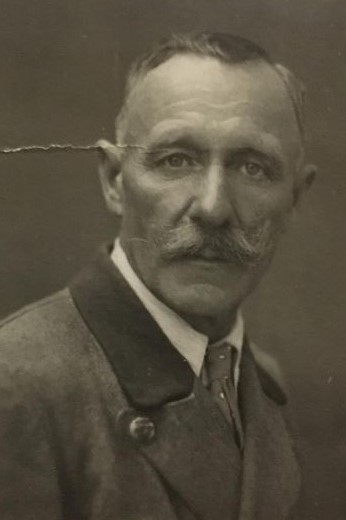 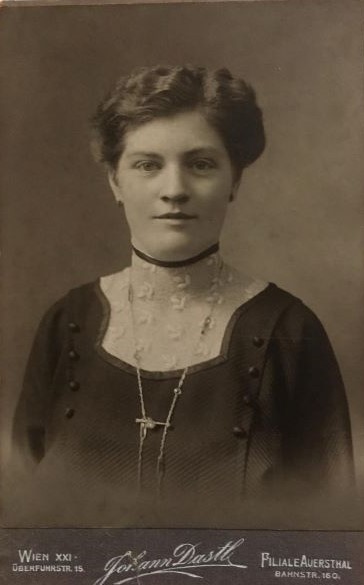 © Anna H.: Meine Schwestern und ich (Mitte) / My sisters and I (second from the right)