Grażyna Oczkowicz was born in December 1937 in the village of Rzędowice in the Lesser Poland Voivodeship. Grażyna was the third of the five children of Kazimiera Tkaczewska (maiden name: Grzywnowicz) and Stefan Tkaczewski. During the war, Grażyna’s father was a guerrilla fighter, so many of the interviewee’s childhood memories are related to the fight against the German invaders. Grażyna Oczkowicz spent her childhood and youth in Rzędowice, and after the birth of her children, she and her husband moved to Silesia, where she started working for an office in Sosnowiec. She still lives in Sosnowiec.

My name is Grażyna, now I’m Oczkowicz, but my maiden name was Tkaczewska. My father’s last name was Tkaczewski, so Tkaczewski was our family name. We lived in a house shared with my paternal grandmother. There were five of us, and during the war, there were just four of us. The oldest sister was taken by my maternal grandfather to another village, the one my mother came from—and she was from Częstoszowice—so that we have fewer children at home. So, she (the elder sister—A.O.) was not with us throughout the war. There were only me, my brother Dzidek, one year older than me, and Kazik. Also, there was Andrzej who was born during the war.

My father was a very, very fierce Polish guerrilla fighter. He was very handsome, tall, and, as far as I can remember, he was always talking about battles, and about those guerrilla fighters, and he was a “staunch Pole.” All of that was a mystery. I remember my father teaching me that I was not allowed to say a word anywhere (about the guerrilla fighters—A.O.) because they were not welcome. Some supported Germans because they liked them; others defended Poland. And my father was very brave. He wouldn’t spare his children for Poland to exist.

The location of our house was quite convenient, because it was in the field, and unlike all the other houses, was further from the street. Therefore those guerrilla fighters could come […]. And he (the father—A.O.) would join. Usually, it was at our house that they made decisions about the details of their fights, let’s put it this way.

But the people in the village didn’t like my dad, because he was supporting the guerrilla fighters. Because they thought that these Germans were so wonderful and kind, and what was the reason to put everything at risk? So the people were against my father because he was bringing trouble upon the village. He was taking care of the whole village, he was a kind of commander and took care of the order in the village, but at the same time, they did not like him because he was a member of the Home Army. Also… You know, when they bombed Warsaw, Warsaw was mentioned in conversations at home quite often, yes. When people from Warsaw came to Tunel (a village nearby—A.O.), as far as I know, my father took care of them, organizing transport for them. The Varsovians were brought to Tunel by train. He found out who had horses and carts, and appointed those people to go and bring them. I remember how they quarreled and yelled and called my father names and everything, but he arranged transport to bring those Varsovians. In the village, he wanted some houses to serve as accommodations for those Varsovians, but they (the inhabitants—A.O.) had great grudges against my father.

Wherever we went, my father would hold my hand. He would take me with him, and that made him feel better. Later, my father looked after them (the Varsovians—A.O.), checked if they had enough food. Sometimes he would bring them some food of his own, some grains or potatoes. And the people (the residents of the village—A.O.) complained about him, because they did not want the Varsovians to stay at their places, but my father somehow forced them to do so, because Warsaw was destroyed, and those people had to stay somewhere. Some of those who came were scholars, some were doctors and teachers. My father brought them because there was a palace there. The owners of the palace (the Zdziechowski family—A.O.) had fled, and their palace was empty. So my father let the doctors and professors live there.

One girl kept visiting us. She was quite skinny, “skin-and-bones”, as my grandma said, though she looked quite fat when she was visiting. She was wearing a coat under which she had rifles. She was bringing weapons and bullets. I remember it. People used to say: Oh there she goes! What a fatty!” She was barely walking. I remember how people pitied over her for carrying such weights. And later, one day she just didn’t come. They said she was dead, shot by the Germans.

That German guy was beautiful. I remember how I liked the guy because he was dressed nicely. When he came, those officers’ shoes were shining on him. I remember how I was observing him. While our people were generally dressed in shabby clothes, he was so well-dressed. I almost envied my cousin whom those Germans came to see (the German soldiers used to visit Mrs. Grażyna’s cousin because the cousin was a young unmarried woman—A.O.). He (the father—A.O.) consented to this so that they would not know that my father was a guerrilla fighter. That’s what people said; this way he could do whatever he needed.

My dad had a friend who lived nearby. His name was Molenda. I can say this confidently because he surely was mentioned somewhere in the documents. And they were born in the same year. He (Molenda—A.O.) joined the Germans. How did they call that… He became a Volksdeutsch. They were great friends with my father because they had been classmates at school. And he kept persuading dad to change sides. Still being my father’s friend, he warned him a couple of times when the Germans were coming to search the village. The guy didn’t report on my father, but my father kept saying he was a Pole and he would not join them (the Germans—A.O.). Sometimes they said Molenda’s “head would fall off one day,” but I didn’t understand what that meant […]. And this is what eventually happened: the guerillas issued a sentence, the death penalty by shooting him. It wasn’t easy to get him (Molenda—A.O.). I remember people talking that it lasted too long and that he kept betraying Poles. But he did not betray my dad, because they were close friends. And one day they said they had killed him. They (the Molenda family—A.O.) lived close by, and my father told me to go and check because I could go anywhere. Somehow they liked me very much as a child. He (Molenda—A.O.) was carried in a ladder wagon. This is how I remember it: he was lying in this wagon dead, and they were taking him to his parents’ house. My dad told me to go and see. I went there, and they didn’t send me away. And I remember him (Molenda—A.O.), I had this picture in my head for a long time. He was sitting in a chair, they have put him like that to shave him. I sat there and watched, and they did not send me away from the house, and later I told everything to my father.

Then the Germans came, I don’t know how many of them. They shouted: “Open the door,” but the grandmother wasn’t there; if she were, she would probably let them in because she liked to have fun. And they (the Germans—A.O.) just smashed the door with their bayonets. I cried a lot because that was such a beautiful new door, and I liked it very much. […]. I liked beautiful things very much. Well, there something I liked so much was totally destroyed! I remember, there were splinters everywhere… The Germans screamed to open the door, and then we didn’t open it because daddy happened to be at home. He had just arrived from their guerrilla location, from the forest, and had spent a night at home. He escaped from the room in his underpants, he didn’t have time to get dressed or take anything with him. Then they broke the door and got in because they were looking for weapons. And they put us against the wall, they told us to keep our hands on the wall, and I remember that I was holding one hand on the wall and holding my mom’s dress with the other. And they screamed a lot, with loud cursing and yelling, and we were so scared. I think they were supposed to shoot us, but they didn’t. They took everything there was in the room and threw out, tramped, and smashed with their bayonets.

My father got seriously ill. My mother said it happened because he had to escape barefoot, in his underpants, and it was snowing outside. He didn’t have time to put on clothes after sleeping. So the father disappeared for a long time, I didn’t know if he was coming back, and I didn’t know if my mother was looking for him. And then he suddenly came back and didn’t go to fight anymore, because he was terribly ill. But he survived till the end of the war. He was lying on the straw, in the barn, in the wagon. I remember, when I had my communion—it was probably after the war—I came to my father and started complaining that I was not well-dressed (at the communion ceremony—A.O.), that I didn’t have a nice dress, that others were dressed so nicely, and that I looked so poor in the borrowed dress. So I was complaining to my father. And daddy told me: My daughter… my dear daughter… if only I were healthy, I would send you there in a veil!” I remember him saying that I would go to the communion in a veil and that I would be very pleased. Well, you know, some things are remembered so well.

People were strongly against us. They bullied us terribly because they said they had lost a lot because of our father, only because he decided to be a guerrilla fighter. They were blaming us for the guerrillas all the time, they didn’t like us in the village. Even when we went to school, we were bullied. Guerrillas! Guerrillas! This is how they used to call us. That’s because people in the village disliked us strongly, and that lasted for a long time. The village did not support guerrillas. At the same time, there was the headmaster of the school […] and one more man who managed the local guerrilla movement together with my father. But then he left because they were looking for him because Poland was against the guerrillas. In those days they thought that if it weren’t for the guerrillas, the war would not be as fierce. I also know that they disliked my father strongly, but the headmaster was supporting the guerrillas. Because he was wise enough to understand what Poland was. He couldn’t express that openly, but he helped us. He helped a lot. 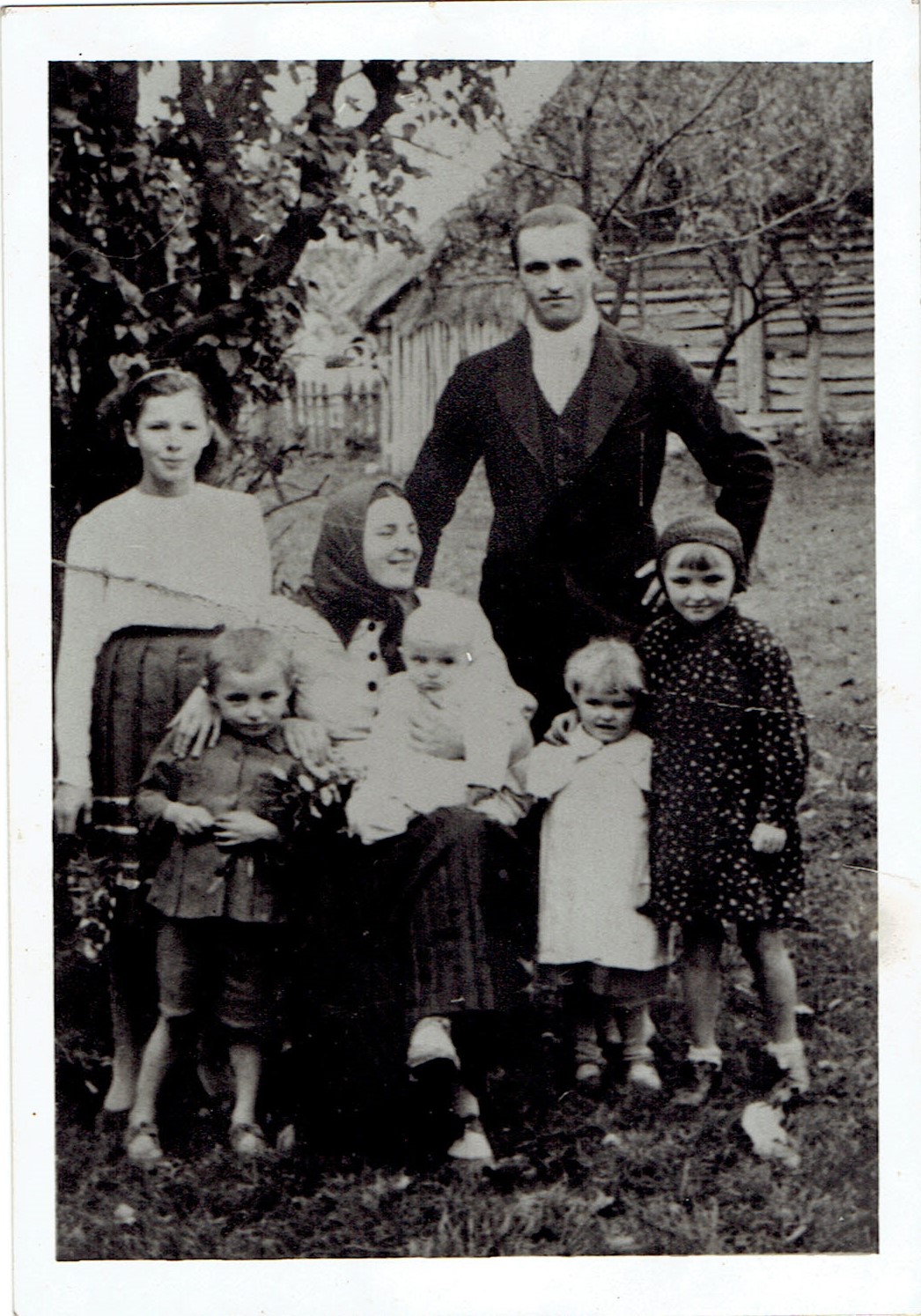 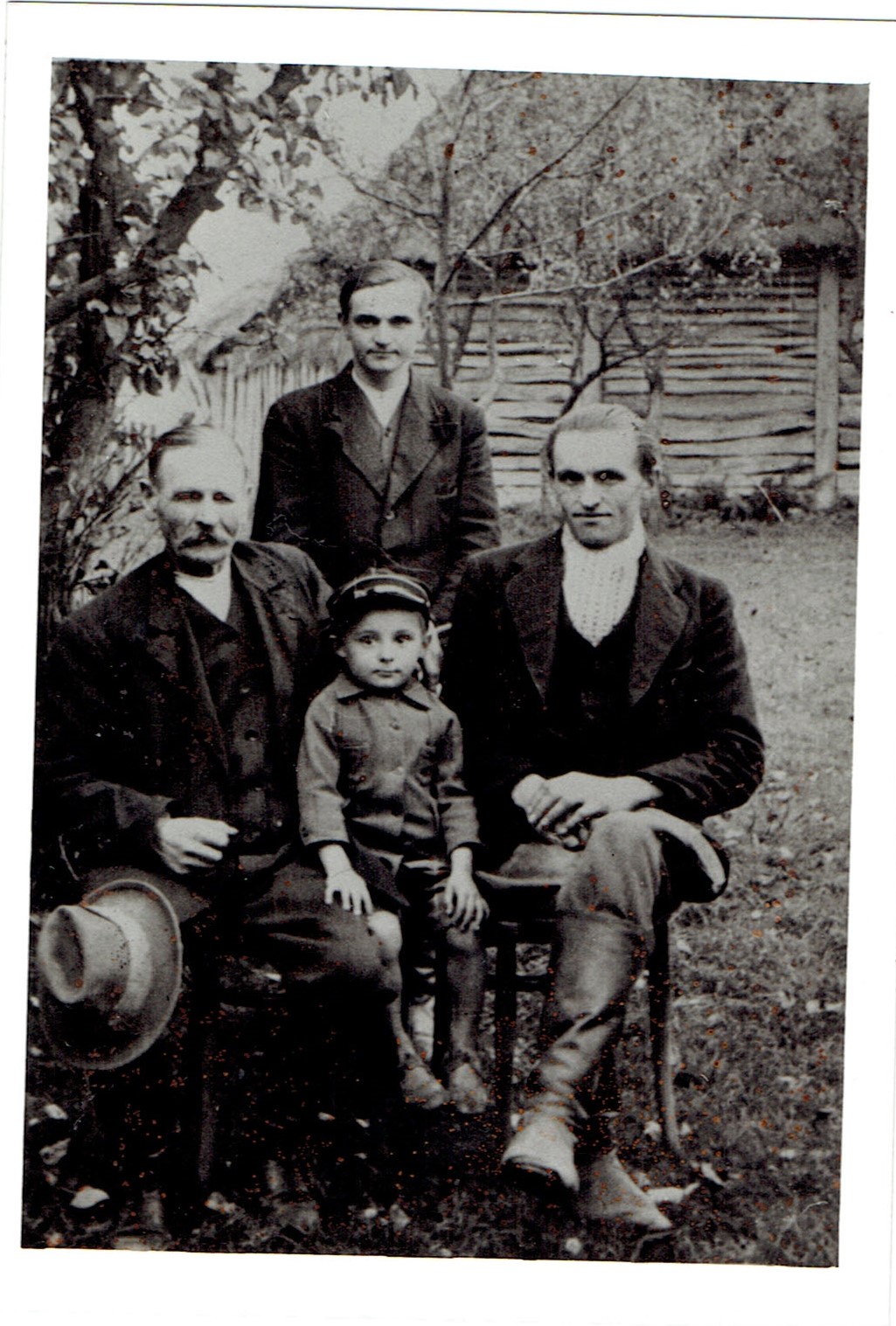 From left - Stefania (the oldest sister), Zdzisław (called Dzidek), Kazimiera Tkaczewska (mother of my grandmother). Kazimiera is holding little Andrzej. Stefan Tkaczewski (is standing), Kazimierz (in white clothes) and Grażyna (my grandmother as a child)