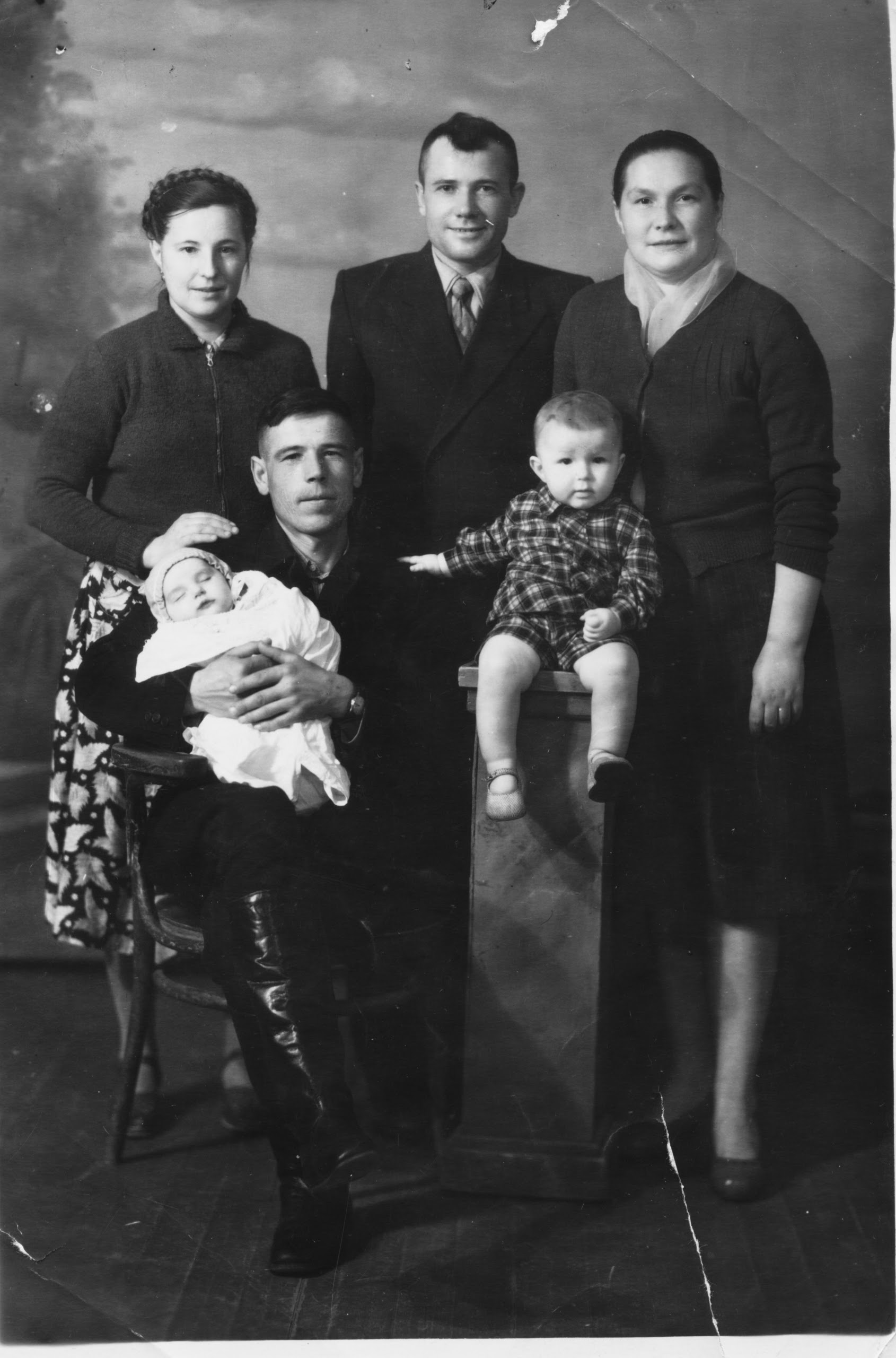 Lidiya was born on February 12, 1927, in the village Lukshyno, Smolensk region (Russia). In 1935 she went to school. She witnessed war since 1942. Since then she stayed in Belarus. 1944 she came back to Smolensk. 1945 Lidiya moved to Kherson region. In 1954 she got married. In 1956 she participated in the XX Congress of the All-Union Communist Party. In 1959 – became a mother. 1966 Lidiya moved together with her family to Pishchanka village in Dnipropetrovsk region. Here she became a grandmother for two kids at once in 1978. Starting with 2004 she has even become a great-grandmother. Now she has three great-grandchildren, who were born respectively in 2004, 2010 and 2015.

There were Fedir Zuyev, Yevdokiya Zuyeva and Nikanor – my uncle. Nikanor died before the war, and his wife became a widow. They had five more children and all of them died of different illnesses. There was also my aunt Mariusha – the wife of daddy’s brother. When mum goes to work, father was not at home and she helped us about the house.

A long-distance way to school lay across the small river.

Uncle Nikanor loved me a lot and used to stand at the gate and wait for me till I come back home from school. We had different interest groups at school, as for example a physical training club. The school gym was spacious and we used to recite the following rhyme while exercising:

I also want to say, that there lived two teachers in our village. They worked during the time period when the Tsar ruled. They were very respected. These were two sisters – one was younger, another one – elder. They lived together in the house. Everyone used to come to them for advice.

Our big and long village was filled with people at once…

I was 13 years old, while Zina, my younger sister, was 8 years old, when the war broke out. In 1941 the war began, and in 1942 we were forced to leave. We already knew what entrenchments looked like, what a shell explosion was like as well as what a bombardment meant.

The first to come to us were Italians. We were in an entrenchment. My mum was very fidgety at that moment; she jumped out and said, “There are some soldiers in brown outdoors”. Germans usually wear green, and this one’s brown… These were Italians.

We had a full collection of Pushkin’s works and the Germans have taken all of them away at once – right after they came. The full collection of works. It was a big book with the inscription “A.S. Pushkin” on it. There was such a beautiful illustration, depicting Ibrahim the Grandfather and Natalia the Pretty.

In 1942 it was yet terrible that they held the front and moved in the Moscow’s direction. They had to eat something; hence they would have let the cattle out of the yard. My deceased mum told: “They let the cattle out of the yard; the village was long and filled with hundred heads of cattle. There was such a roar”. She continued, “I thought, I was going to go crazy, it was unbearable”.

Father was disabled since childhood, but he still used to mow the lawns and do everything around the house. He told, “They will leave, as they have come, but many people will die”. However, in 1942 we were put out from home: villages and houses were set on fire. And then we were transported to Belarus as a transit place on the way to God knows where… probably to Germany. Germans forced us to go for three days. Many people died: it was frosty and snowy in February, the minor step aside and they got shot. We passed and I could see those two teachers there as well, lying one over the other one on the sledge. Already killed.

I can also remember a red blanket and a small child sitting and looking around… Perhaps his/her parents have left it, or perhaps, his/her mum was killed. We’ve walked for 800 km on foot altogether. Then police forced us to go. But they gave us chances to rest. Sometimes we would have entered the house and the house was empty. Only beds were spread, a loaf of bread lying. But there was noon in the house, its inhabitants were forced to leave it and go further.

Both aunt Mariusha and my father caught typhus and died. Once, I told my dad (here we call father “tiatia”), “Tiatia, will they force us to go even further?” And he answered: “Lida, you know me, I’m going to find you wherever you happen to find yourself.” And when we departed in the morning, he was not with us anymore. He was thrown out somewhere, and that’s it. I then asked mum, we didn’t understood anything: “And how did you cope with it back then?” And she told: “I thought of nothing. I just hold you by the hands, so that I could keep you at my side”.

The minor step aside – and you could have been killed. The whole road was covered by corpses. And then all bodies were burnt, so that nobody could even get to know about it. Then mum became ill as well. She was taken to the hospital. Well, what hospitals looked like back then? Hospitals were organized in empty courtyards. And I was forced to go further, 200 km more. I spent the night there and returned back. It was Easter, I was treated with Easter eggs. I returned back to tell Zina and mum where we stopped. In 1943 Nazi started retreating. When we were in Belarus, we could find different stuff left by them, which we collected. Zina and I once wandered in the wood. Suddenly, I saw the tent. I got it and started crying. Our soldiers were sitting there. One could see the stars on their form. They called us and said, “Hey girls, come here!” We approached them, and they asked us whether Nazi were in our village. We said “No”. It turned out to be the intelligence service.

Well… Then we came back to the village in Smolensk region, although we knew that nothing was left over there. There remained a small shed and a house, where we stayed. There lived my best friend Yermakova Yevdokiya. Later we received a letter from Kherson, that aunt Mania (my father’s cousin, she was literate, she was a milkmaid in the collective farm) learned, that Zina and me stayed alive (mom was still alive as well). She gave us the address, so that we could go there. We travelled from Smolensk station “Drohobush” to “Apostolov” for eleven days.

It was a Victory Day. A small amount of us gathered in the village, because there were not so many inhabitants there altogether. A teacher held a speech. She told, “The war will end, we’ll heal our wounds, and the life will become well again!” It was true, for ex. the factories were rebuilt.

This is my husband Hryhoriy Zubanenko, born 1925. I always cry that the war has taken my childhood away from me. But he told me his story about the time he spent at the concentration camp. He was already thrown out, as if he were a dead one. There was a man whose surname was Shcherbyna. He came from his village. He noticed my husband still moving, being alive. He took him back to the plank beds, and rescued him in this way.

The two men worked in the same place. Germans would give him the work and let him make a grenade or something else. One of the Germans, the headman, saw him sitting, so skinny and exhausted. He would come up to him calling him “Tego” instead of “Grisha”. He would look at him and give him a piece of bread with margarine. And he would hush me not to tell anyone about it. They were in a concentration camp with his cousin from Kryvyi Rih. Americans liberated them. They brought big boxes with bread and sausages. Everyone made for the meal, and that’s it, they overate after hunger and died. So his sister told him: “Don’t eat, please!” For two days long she would give him just some water and a piece of bread daily, till the organism got accustomed to it. Then he was drafted into the military. 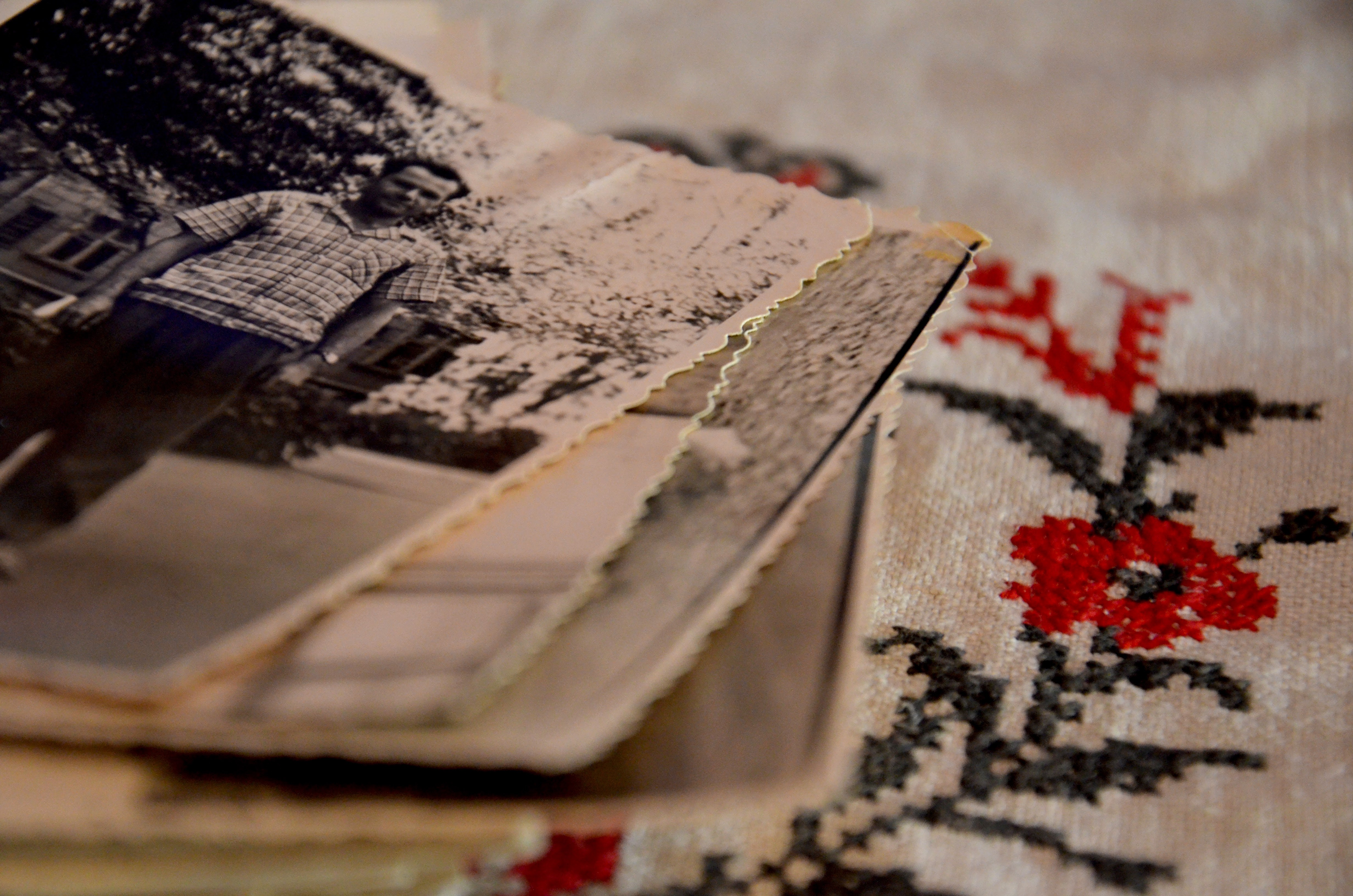 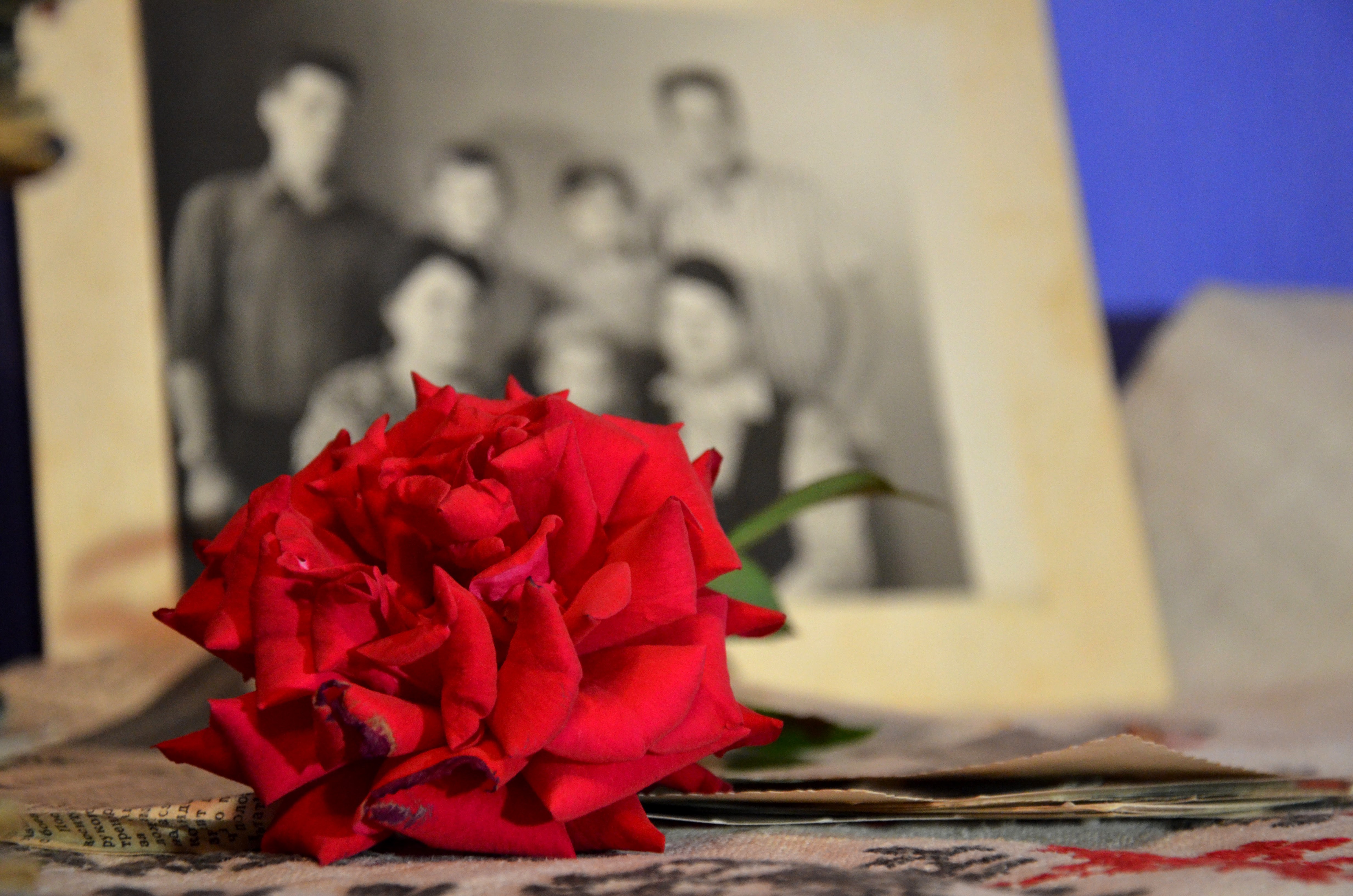 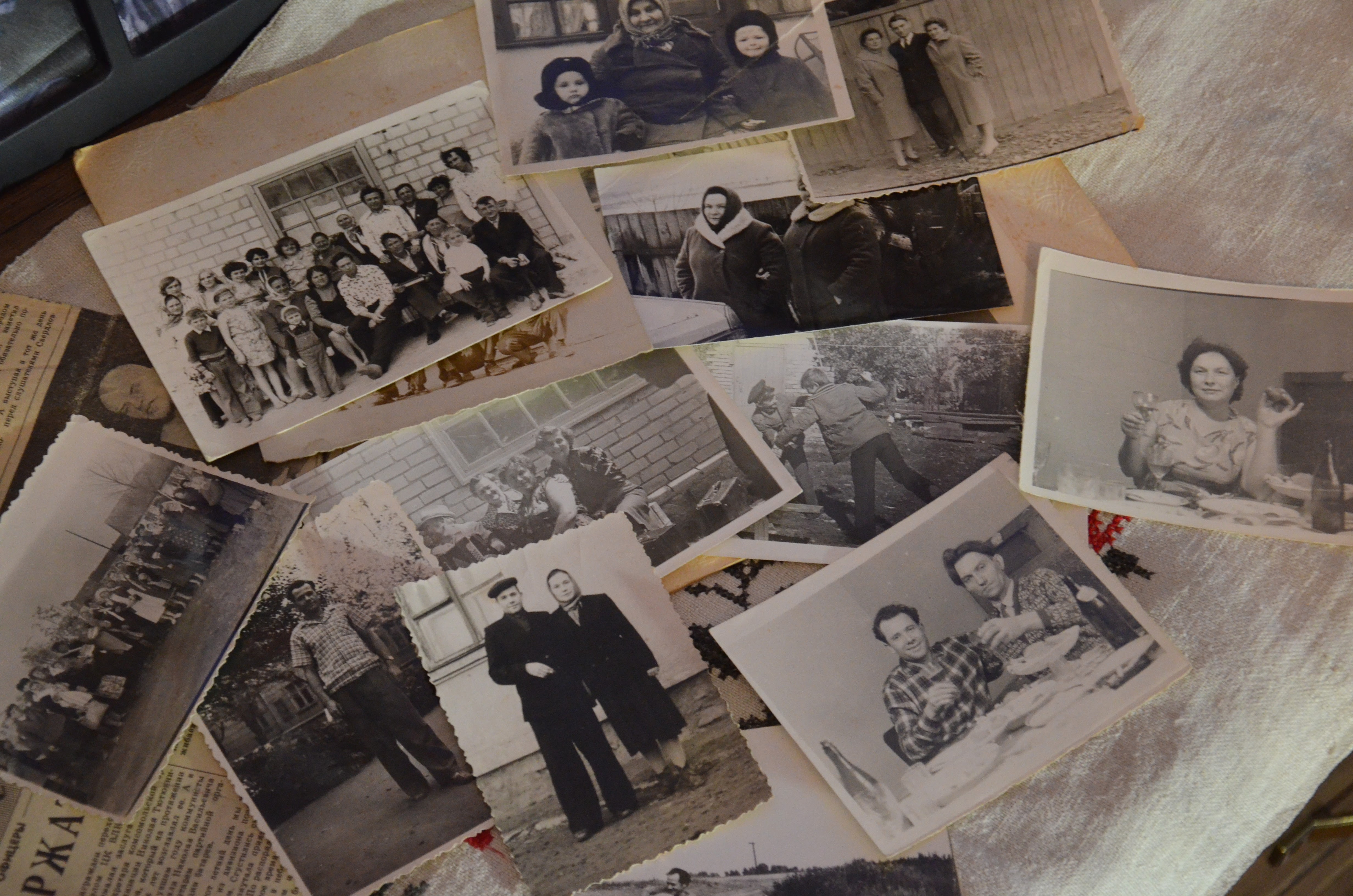 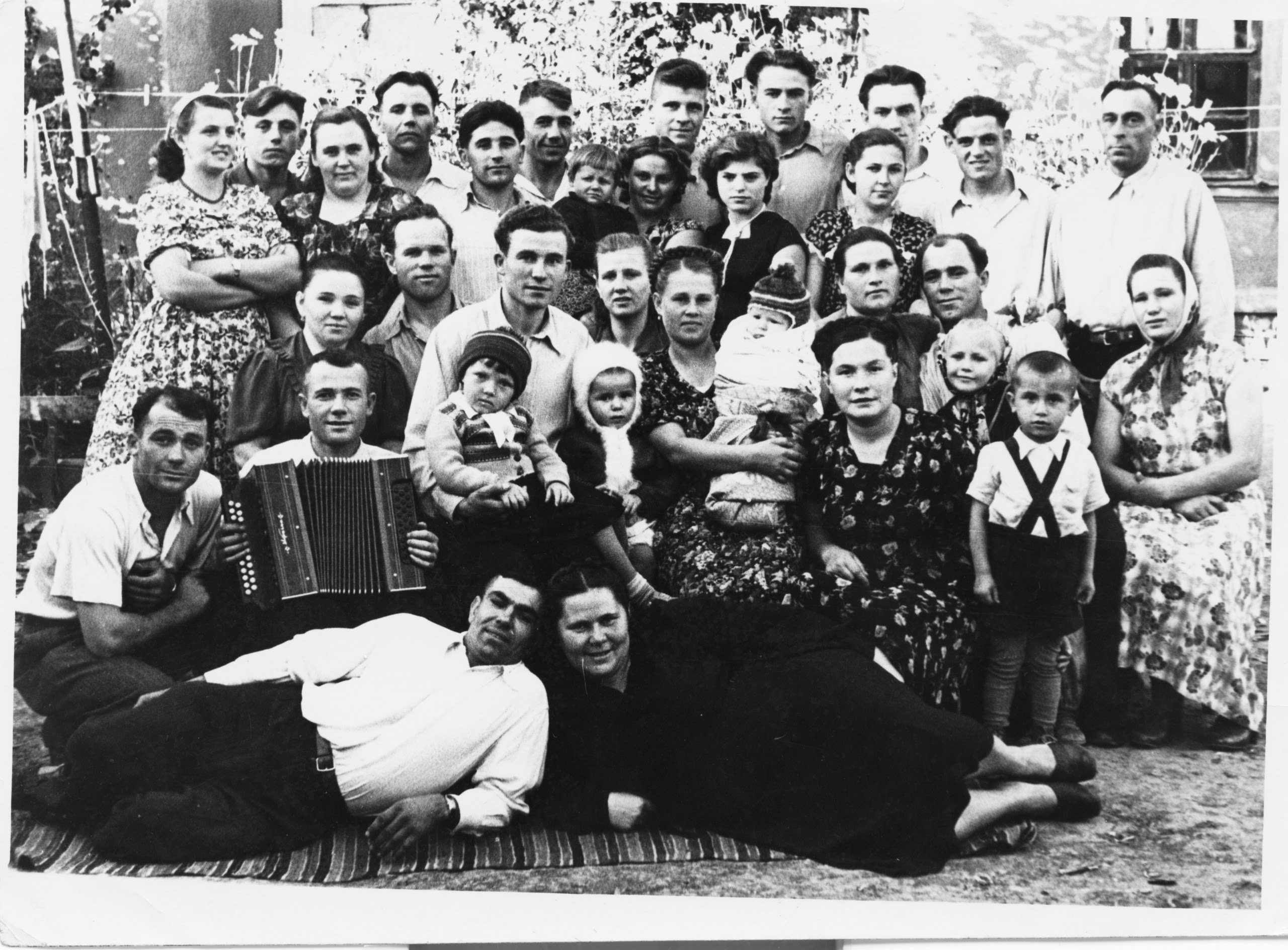