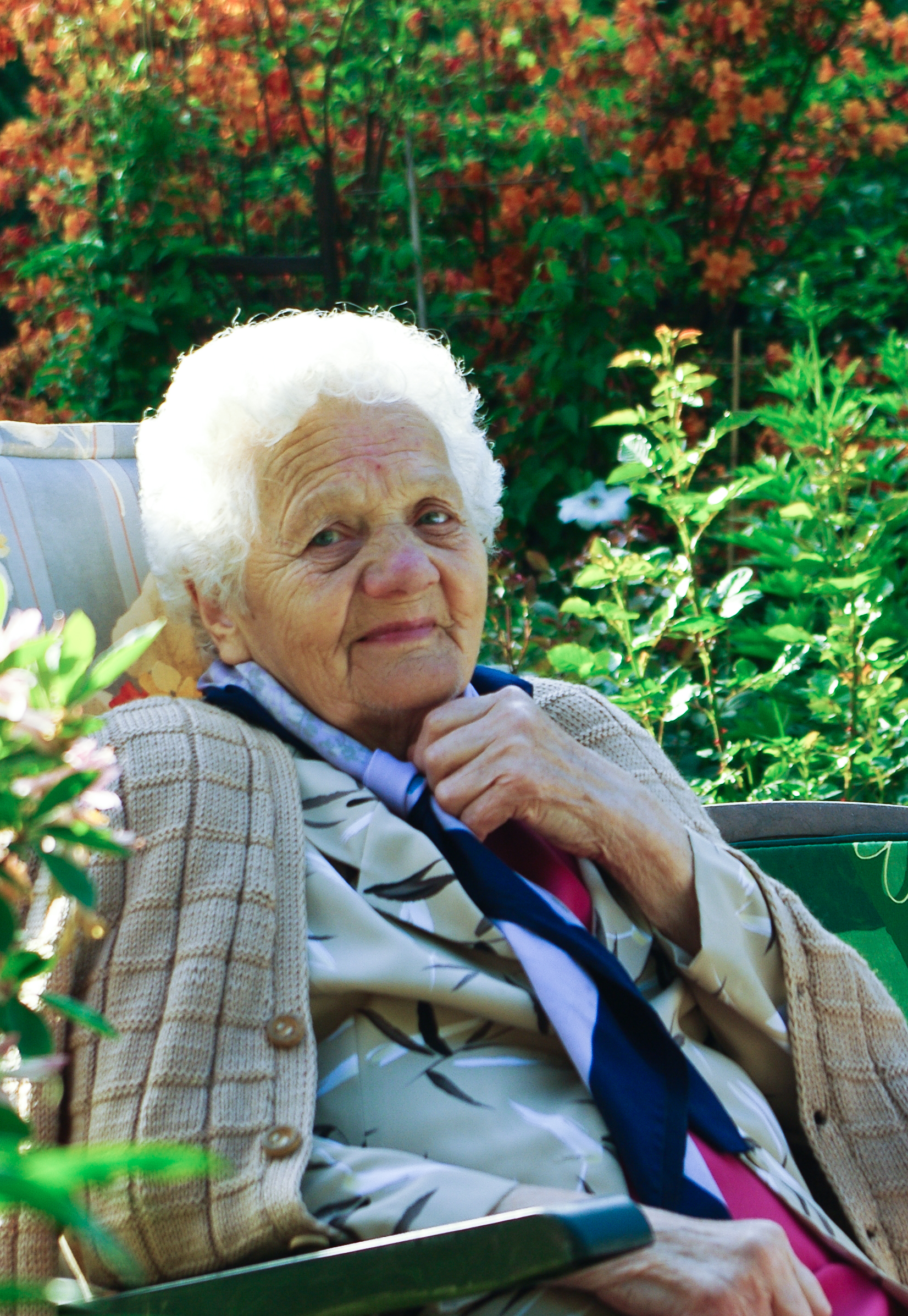 Stefania Jasińska (née Kramarczyk) was born on 26th December 1926 in Osiek, Poland. In 1941, she was taken to Germany to perform forced labour. She worked for the Heinze family, which lived in Piltsch at that time (today: Pilszcz, Opole voivodeship). She returned to Osiek on 9th May 1945. She died on 19th January 2016 at the age of 89.

Later, they started organising a transport to Germany. It was getting dark. I had left my bag on the carriage in Grojec. When they were taking me to Oświęcim, my brother took the bag from my parents in Grojec and wanted to hand it over to me. The car was driving up a hill, my brother was riding his bike next to it and I was knocking at the window so that he could see me. Then the Germans stopped the car and let me take the bag. They wrote my address on it and brought me to Oświęcim. It was late.

In Oświęcim I met two Polish girls. They deplaced everyone from Osiek, the entire village… In Oświęcim, the Germans wanted to separate us and take one of us away, but none of us wanted to go with them. We slept in one bed, all three of us. In the morning they loaded the transport to Germany. They called me, gave me the address which I should go to and put me on the train. There, I met a German woman who helped me and took care of me. At some point, the train stopped, she called a horse cab and brought me to the address which I had been given.

In the village, there was a Wachtmeister [constable]. His name was Jasiński [popular Polish surname]. He stayed in Germany after World War I and worked as a Wachtmeister. He said he knew where I should go and he brought me to the Bauer [German landlord]. He knocked at the window and shouted: „Gustav! Gustav! Steh auf! Steh auf!” [Gustav, get up!]. Gustav got up and so did his wife. They brought me water, so that I could wash myself, and gave me some food. Then the landlady took me to the room and showed me how to turn off the light. We didn’t have electricity in Poland at that time. The landlady kept flipping the light switch and I was just so tired, so very tired… Finally I went to sleep and slept until the morning. In the morning I woke up.

My Bauer was a member of the Sturmabteilungen, he had a black uniform, and the landlady went to church every day. Once someone came to my landlord and told him something, and he went out and beat one Polish or Ukrainian girl. His wife shouted at him for that, she asked why he had gone there. She said: “That’s the Wachtmeister’s job!”

On the first day, I saw a cake with crumble topping through the window. It was Pentecost…

I repeatedly said that I didn’t want to be in Germany, but my landlady said that it wouldn’t help, that I had to stay there. She made me write a letter to my parents. I wrote that I was doing very well.

The family had five daughters, I was the youngest one in the house. Everyone called me Steffi.

Once the landlords wanted me to sweep the yard. I took the broom and went to sweep, and suddenly I saw six horses! Further away, there was a row of big cows and another row of smaller ones. Then there were pigs on both sides. The landlords asked me if I knew how to milk a cow. I told them I didn’t, because I was afraid of these cows, but the truth was I knew how to do it. They made me learn to milk the cows and they were surprised how quick I dealt with that. I had to get up in the morning to milk the cows and then go to do the farming. We ate lunch at midday and dinner in the evening.

In the morning I went to work, then I ate breakfast and went back to work. When I was going to work in the field, the landlady gave me bread with lard.

There was one big table which I sat at together with the landlord and his wife. There was a Lager [camp] nearby, where Russian prisoners of war were brought from to work in the field during the day. They sat at the table together with us, the landlady had even deloused them.

Once I went to Troppau to the photographer. When I came in, a German soldier was just leaving. He waited for me outside. He took me by the hand and led me to a restaurant. Me, a Polish girl, together with a German soldier, and I had never been to a restaurant before! I was afraid, because other Poles could denounce me for hanging out with a German man. I didn’t know how to behave, so I thought when he takes a glass in his hand I will just do the same. But he had a prosthesis instead of a hand, so what could I do? It turned out he had been in the army before.

My daddy died during the war. I think his heart broke when he saw what happened to our house. Karolka, my sister, was also in Germany and she came to Piltsch to take me to the funeral. But we came too late. When we were climbing the hill to the church, the funeral was over and everyone was already going down. Then we had to return to Germany.

The front was approaching. We were fleeing to the West, towards the Americans. Our horses died on the way. The [Bauer’s] family had left everything at home, they had only taken as much as there was space on the carriages. Finally, the German army capitulated. The Russians were bombing German towns and raiding the country. During the last role call, the German soldiers were drinking alcohol and they gave some to us, because the entire situation was more like a huge crowd than like a role call. When the morning came, the soldiers put up white flags and the Russian army arrived. The German soldiers slept in a nearby castle.

At night, one of the Russians came there and raped my Bauer’s daughter. Gustav wanted to hit him, but the other Germans held him back. They were too scared. Finally, we were allowed to go home. Then, my landlord was arrested and charged with membership in the SA.

The family had one son, too. He was 19 years old when he went to the army. Three months later the family was informed that he had perished and that his place of burial was unknown. Sometimes, the landlady would lay down in front of a holy icon. Next to the house there was a little forest where the boy used to go to get some sand. She would go there and shout: “Rudi! Rudi! Wo bist du?!” [Rudi, where are you?] The landlords also had five daughters, all of them were grown-up, I was the youngest one in the house. But they had only one son… Sometimes I sang Polish songs.

One girl I met in Germany enjoyed it very much, when I sang “Jeszcze Polska nie zginęła…” [Polish national anthem].

I felt good there. I had to work, that’s true, but I was never hungry. At that time, in Poland there was nothing but poverty. The Bauer’s family liked me, they called me Steffi. I was the youngest one there.