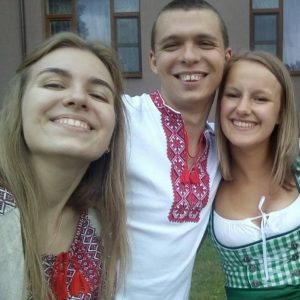 I would like to share my impressions from the participation in the international project “History begins in the family” with you. The first session of the project took place in Lviv from 03.07.2017 till 09.07.2017 in the St John Bosco Youth Centre.

Young people from Ukraine, Poland and Germany took part in this event. During the project we discussed family stories of the participants focusing on the time of The Second World War. We also enjoyed a bunch of entertaining games, both physical and intellectual.

Apart from that we had a great opportunity to get acquainted with the historical part of the Lion City in form of a quest. I, as a participant of the project, got great impressions from visiting “The Citadel Fortress”, its history is full of great unbelievable events, starting from the middle of the 19 century. During the period of The Second World War a nazi concentration camp called “Stalag-328” was located on the territory of this fortress. More than 140,000 people: Ukrainians, Russians, Poles, Italians, Frenchmen, Belgians were tortured to death in this camp.

I also really liked the conversation with Stepan Horetshyi, who actively participated in the OUN UPA during the national liberation movements of the 1940ies. He was responsible for distributing “Samvidav” – underground informational resources. Because of this activity he was arrested by the Soviets and sent to the concentration camps for 25 years. Stepan Horetshyi was in the concentration camps of Kengir, Spask, Aktas, Sarana, Karabakh. In the summer of 1952 he was transferred to Norilsk. From May 26 till August 4 1953 he took part in The Norilsk Uprising. Mr. Stepan told us a lot about the hard life in concentration camps. After the conversation with Stepan Horetshyi we understood, that thanks to the iron will a person is able to survive all the disasters and tortures falling on their fate.

I would also like to send my words of gratitude to the organizers of the project “History begins in the family”: Oleksa Stasevych, Oleg Ovcharenko, Svetlana Arabadzhy, Lyudmila Levchenyuk, Olga Shevchuk, Mariçka Polyulyuk, Elżbieta Pasternak, Benjamin Günther. Thanks to all the participants of the project. For this time we became a big great family. I am looking forward to seeing you in Poland in November!